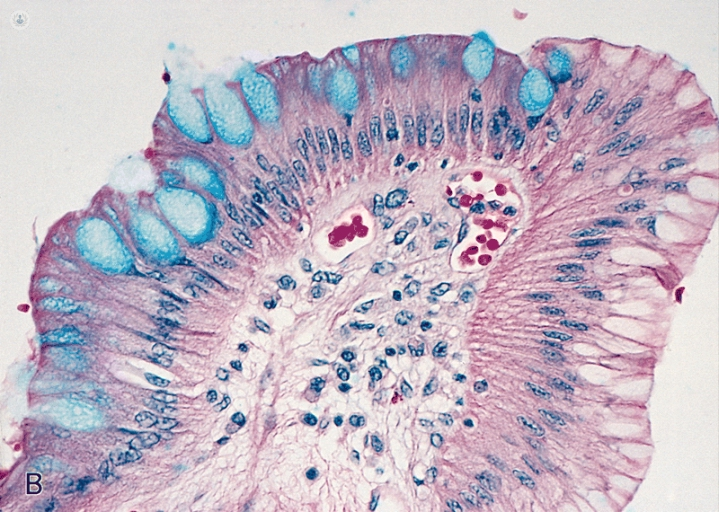 What is Barrett's oesophagus?

Barrett's oesophagus (spelt “Barrett’s esophagus” in the US) is a condition in which the tissue that lines the bottom of the oesophagus undergoes a change, usually in response to acid reflux from the stomach. It is a relatively common complication of gastro-oesophageal reflux disease (GORD).

Normally, the oesophagus is lined with squamous epithelial cells. However, exposure to stomach acid regurgitating up into the gullet can inflame and damage the cells. This leads to a phenomenon called metaplasia, whereby the cells change into a different kind of cell, in this case columnar cells that are usually found in the lower digestive tract. These cells better resist the stomach acid, protecting the oesophagus.

However, symptoms of reflux can still bother the patient, and in a small number of cases, the cells can become cancerous. For this reason, Barrett’s oesophagus is regarded as a premalignant condition and although the proportion of cases that lead to oesophageal cancer is small, the condition should be monitored once diagnosed.

What are the symptoms of Barrett's oesophagus?

Barrett's oesophagus itself does not produce symptoms. However, it is almost always caused by acid reflux and this can cause a number of other symptoms:

Barrett’s oesophagus is closely associated with gastric reflux (also known as acid reflux or gastro-oesophageal reflux). This is a phenomenon where stomach acid splashes back up into the oesophagus, usually due to a problem with the ring of muscle that separates the oesophagus from the stomach (the gastro-oesophageal sphincter). If this sphincter loses tone and is unable to close, stomach acid is able to regurgitate back up.

If the patient experiences long-term acid reflux, this is known as gastro-oesophageal reflux disease (GORD). Around 1 in 10 patients with GORD will develop Barrett’s oesophagus.

The exact mechanism that causes Barrett’s oesophagus isn’t fully understood, as not all patients with acid reflux develop the condition.

Can Barrett’s oesophagus be prevented?

Early diagnosis and effective treatment of acid reflux or GORD can significantly reduce the risk of Barrett's oesophagus developing.

What is the treatment for Barrett’s oesophagus?

The first line of treatment for Barrett’s oesophagus involves managing the symptoms of acid reflux. This may involve the following measures:

Barrett’s oesophagus should be monitored closely via endoscopy to check for signs that the Barrett’s cells are progressing to cancer, in which case they will need immediate treatment.

If the cells become cancerous, the following procedures serve to remove the harmful tissue:

Any cookies that may not be particularly necessary for the website to function and is used specifically to collect user personal data via analytics, ads, other embedded contents are termed as non-necessary cookies. It is mandatory to procure user consent prior to running these cookies on your website.